The Price of Health Care

Do Medical Visits Land You Over or Under Budget? 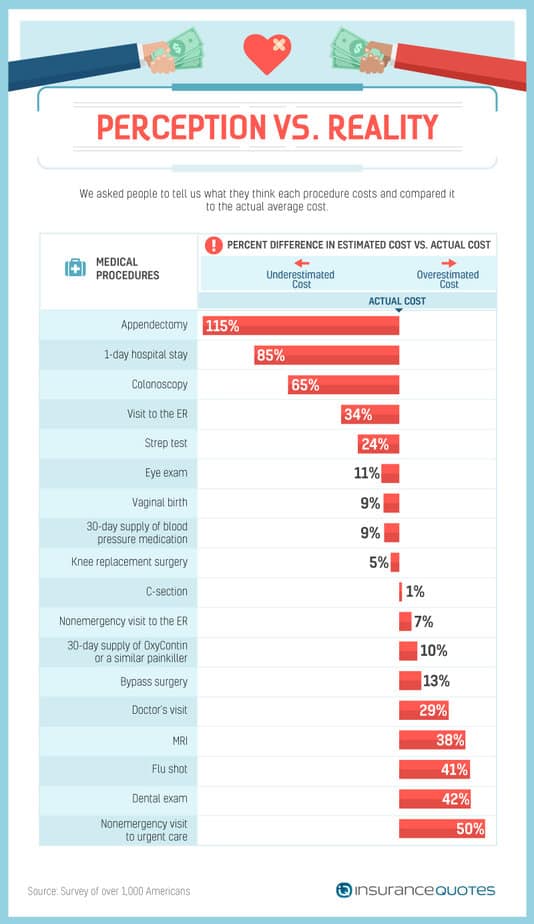 Are you putting off that doctor’s visit or dodging the dentist? Do you take your chances with the flu because you’re concerned you won’t be able to front the bill for the vaccination? How much money does it take to get these things done, and what visits are surprisingly more affordable than consumers guessed?

Nearly 42 percent also overestimated the price of a trip to the dentist’s office or flu vaccination.  The average estimated cost was $205 for a dental exam and $68 for the flu shot. However, the actual costs for these services averaged $120 and $40, respectively.

Unfortunately, American consumers also underestimated the price of some common medical procedures. Americans underestimated the price of having their appendix removed by 115 percent. The estimated average cost of an appendectomy was $7,412. In reality, the actual cost averaged $15,930. To top it off, this is one of the most common acute surgical procedures in the nation, with 120 out of every 100,000 Americans having appendicitis in their lifetime, according to the Society of Laparoendoscopic Surgeons.

A visit to the hospital doesn’t run cheap, either. Americans underestimated the cost of a one-day hospital stay by 85 percent. And an emergency trip to the emergency room cost 34 percent more than expected. The only procedure that matched reality and perception was a C-section delivery. The estimated cost was $16,332, while the actual cost was slightly less at $16,106.

What Are Consumers Willing to Pay for Health Care? It seems that perception and reality hardly align when it comes to the American health care system. Therefore, we posed another question: How much money do Americans feel they should be spending for these medical procedures? Once again, the actual costs overshadowed the ideal costs for American consumers.

It turns out, only one of these medical procedures costs less than what consumers wanted to pay. The flu shot was $15 cheaper than the average ideal cost of $55.

The remaining procedures had steeper costs. Bypass surgery had the largest price discrepancy with a $70,789 difference in what consumers wanted to pay versus what they were asked to pay. The same surgery can be conducted for a fraction of the price in the Netherlands, where it costs under $16,000.

Taking a trip to the doctor or dentist may be more manageable, with much smaller relative price discrepancies of $110 and $38.

Is It Worth Going Into Debt for Health Care? Emergencies, accidents and unforeseen health issues happen. But with such drastic price discrepancies for some of the most common medical procedures, how can Americans afford to pay the bill? What procedures are “worth it” when reality strikes?

We asked survey participants to rate different procedures on a scale of 1 to 5, with 1 being “not worth it” and 5 being “worth it” when it came to going into debt for medical procedures.

Heart surgery was the second procedure deemed most worth going into debt over at 4.3. Other procedures that were considered “worth it” included a hospital birth (3.7), geriatric care (3.6), a diagnosis of unknown health issue (3.3) and mental health care (3.1).

Americans Find It’s All Too Expensive 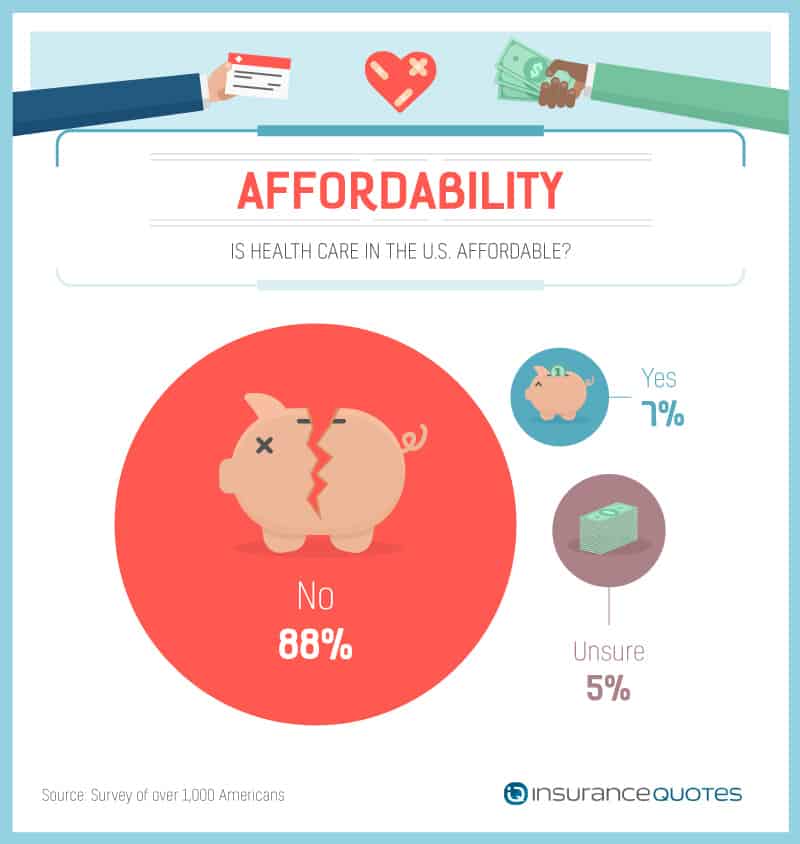 Do Americans consider U.S. health care affordable? We found the overwhelming majority said no. In fact, 88 percent of Americans said health care in the U.S. was not affordable. Additionally, 7 percent said it was affordable, while only 5 percent were unsure.

According to a study collectively published by Harvard, NPR, and the Robert Wood Johnson Foundation, more than a quarter (26 percent) of adults in the United States say health care costs have caused a serious financial problem for them as an individual or for their family. The second most common consequence of large medical bills in the nation was spending all or most of one’s personal savings (42 percent).

How does America compare to other developed countries when it comes to affordable health care?

When it came down to cost, more Americans thought U.S. health care cost too much compared to other developed countries. Thirty-two percent of Americans thought health care cost five times as much, while almost 18 percent thought it cost twice as much, 20 percent believed 10 times as much and 17 percent thought the price disparity was even greater than that.

In fact, Americans spend the most per person compared to other high-income countries, according to The Commonwealth Fund. In 2013, consumer spending on health care attributed for 17.1 percent of the nation’s gross domestic product, which was about 50 percent more than any other country. Increased spending is attributed to higher prices and more use of medical technology, such as diagnostic imaging exams, such as MRIs and CT scans.

Although differing standards and practices make quality difficult to measure across the board, the high prices of American health care can limit access to care. According to the Peterson-Kaiser Health System Tracker, 37 percent of Americans reported cost-related barriers in 2013, compared to 4 percent in the United Kingdom and 22 percent in the Netherlands.

Another cost-related roadblock facing American consumers is that prescription drug prices are also extraordinarily high. According to The Economist, prices are high in the United States because the government does not implement price control on pharmaceuticals, unlike many European countries. Therefore, companies can name their price, making some medicines out of reach of American consumers who need them. And government-based insurance programs, such as Medicaid, get a mandated discount that may still be out of reach for some, while those using Medicare are one of the drug companies’ biggest consumers.

There will always be differences of opinion over how a country should be run versus how it is operated. We asked American consumers what changes they would make to the U.S. health care system, and we collected the top 1,500 responses based on popular keywords.

The United States is one of the only high-income countries that does not have universal health care, and 12 percent of participants used these keywords to describe their ideal reform. Another common keyword was insurance (13 percent).

Some less popular reform ideas included keywords, such as free (0.82 percent), better care (1 percent), eliminate Obamacare (2 percent), socialize (2 percent) and for everyone (1 percent). About 2 percent remained unsure of reformations they would consider making.

Protection Can Be Priceless

Despite differing perceptions on how the U.S. health care system stacks up in comparison to other countries, reality has a way of striking us all, sometimes when we least expect it.

Protection can be priceless, especially when it comes to the health of you or a loved one. Let insuranceQuotes.com find the insurance you can afford to help give you peace of mind for whatever may come your way. Contact one of our customer service agents today to get a free quote, so quality and affordability can become a reality when providing protection for you and your family on the road.

We surveyed 1,000 Americans about what they thought specific procedures and common medical expenses cost without insurance. We then compared answers to the actual average cost in the United States.

Please use the information and images you find on this page freely for noncommercial use. But don’t get caught without insurance. Please make sure you link back to this page to give the author’s full credit for the research.