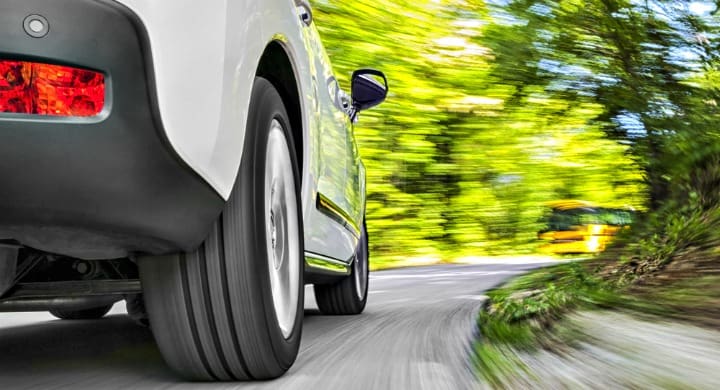 It’s fairly well-known that a moving violation ticket is going to wreak havoc on your auto insurance premium. What may surprise some drivers, however, is just how financially significant certain moving violations can be.

For the fourth consecutive year, insuranceQuotes commissioned a Quadrant Information Services study that found car insurance premiums can climb by as much as 96 percent after a single moving violation on average nationwide.

The study analyzed the average national premium increase for one moving violation in 21 different categories, including careless driving, reckless driving, driving under the influence and speeding.

For instance, one conviction for driving under the influence (DUI) — also known as driving while intoxicated, or DWI — will result in a national average premium increase of 96 percent (up from 94 percent in 2016); however, one infraction for not wearing a seatbelt only results in a 7 percent average premium spike.

And while the average driver may find these numbers surprising, insurance industry experts and analysts are rather unfazed. Moving violations, they say, suggest risky driving behavior, and the riskier the driver the more expensive he or she is to insure.

“Past driving habits are the best indicator of future driving habits,” says Gary Ahrens, owner of the Florida-based Ahrens Insurance Agency. “Statistically, prior moving violations and accidents have a higher correlation with increased claims costs in the future. In the 31 years I have owned my agency, moving violations have always had a significant impact on your premium.”

Here are some of the study’s key findings along with some advice on what you can do after a moving violation to keep your rates as low as possible. Your premium increase will depend on the specific violation

“Moving violations are typically weighted with a point system. This makes an excessive speeding violation much more severe than, say, a broken taillight violation,” Nevo says. “Insurance companies often see more points against a driver’s license as an increased risk. Therefore, you’re going to see higher premiums for that driver.”

Take, for instance, the difference between reckless and careless driving. According to Nevo, careless driving is usually defined as “a minor lapse in judgment,” such as following too closely to the vehicle in front of you.

Reckless driving, however, concerns more “intentional acts,” such as driving in a way that shows no regard for the safety of others. “The main difference between reckless driving and careless driving is the driver’s state of mind,” Nevo says.

“If a driver is operating a motor vehicle in a potentially dangerous manner, but without specific intent to harm — like doing donuts in an empty parking lot — it would fall under careless.”

If that same driver, Nevo says, “were operating a motor vehicle with specific intent to cause harm and with disregard to the safety of other people or property — such as donuts in the middle of a busy intersection — it would fall under reckless.”

Your premium increase could be expensive

Each of these percentage increases can have a significant financial impact on a driver’s premium.

For instance, according to the National Association of Insurance Commissioners (NAIC), the average annual U.S. auto insurance premium is $866. That means an 88 percent premium spike for one reckless driving offense will result in an increase of just more than $750 per year. And if you have two reckless driving tickets under your belt you’ll be looking at a premium increase of 173 percent — or almost $1,500 per year.

Even relatively “minor” infractions, such as following too close or not yielding to a pedestrian, can mean paying an average of $260 more per year for car insurance.

CHECK OUT: Why Your Auto Insurance Claim Was Denied

“The bottom line here is that if you drive poorly you should pay more for insurance,” says Kevin Lynch, assistant professor of insurance at The American College of Financial Services in Pennsylvania. “If you’re not being a safe, courteous driver, you’re the one causing all the problems.”

To that end — as might be expected — driving under the influence carries the stiffest insurance penalty, with a single infraction resulting in an average premium spike of $1,086. A second DUI offense means an average increase of more than $2,000 per year.

“The bottom line is that some moving violations imply a greater recklessness and risk to the insurance company,” says Dan Weedin, a Seattle-based insurance and risk management consultant. “For example, someone going five miles per hour over the speed limit is acting far less recklessly than someone going 30 miles per hour over the speed limit or driving under the influence. Therefore, more reckless violations carry greater consequences.”

Your premium increase will depend on your state

If you commit a moving violation the impact on your auto insurance premium will also largely depend on where you live.

These differences apply to a wide variety of moving violations from state to state. When it comes to speeding more than 30 miles per hour over the posted limit, Hawaii drivers experience the most significant insurance penalty, with an average premium increase of just more than 100 percent for a single violation (in Illinois it’s a 92 percent increase and a 78 percent increase in Michigan).

Meanwhile, the same violation in Pennsylvania will only result in an average premium increase of 14 percent (16 percent in Georgia, Texas and South Carolina).

RELATED: Ultimate Guide to Marijuana Use and Insurance

Perhaps the starkest difference can be seen in a violation for failure to wear a seatbelt.

In North Carolina, just one ticket for this infraction will result in an average premium increase of 27 percent (22 percent in Oregon and 20 percent in Utah). Meanwhile, in 32 states this particular violation moves the premium needle by less than 5 percent, including seven states where it has no impact on premium price at all.

According to Lynch, this notable disparity between states comes down to the way each state regulates auto insurance companies and the factors they can use to increase premiums.

“There are 50 states and 50 different state insurance commissioners. The legislature in your state passes laws about what insurance companies are allowed to do when it comes to raising rates,” Lynch says. “So if a certain insurance company in a certain state wants to raise premiums on people with certain driving habits and points and violations, that’s within their right to do so if the state says they can.”

In California, for instance, an individual’s driving safety record must be the primary factor in determining what he or she will pay for insurance (it’s the same in Hawaii). As a result, any blemishes on one’s driving record — like a DUI, speeding, or reckless driving violation — will impact the premium more significantly than in less tightly regulated states where insurers can use additional factors like a driver’s credit score to determine premiums. “The difference [in premium increases] between states is driven largely by difference in regulatory environments between states,” says Eli Lehrer, insurance expert and president of the nonprofit R Street Institute. “States that have particularly high or low impacts from DUI are those that strictly limit the number of factors that can be used [in setting premiums]. The impact is generally less in states that allow the widest range of factors to be used.”

You can still save money after a moving violation

The good news is that no moving violation stays on your driving record forever. But how long it’s going to impact your premium depends on the severity of the violation as well as individual state laws. Here are some tips on how to potentially ease the burden of an increased premium.

Make a deal: Most states offer plea bargains at traffic court that can help drivers expunge points from their record, provided the violation isn’t too severe.

“Generally speaking, most states will allow a person to offset something like a speeding ticket by pleading ‘no contest’ and staying free of any additional moving violations for 90 days,” Lynch says. “What’s more, many insurers will lessen the impact on your premium if you take a defensive driving class.”

Shop around: Shopping for a new car insurance policy after receiving a traffic moving violation may also be a good idea, although don’t think that you’ll be able to hide from the violation altogether.

Wait it out: Eventually your driving record will go back to its pre-moving violation status, but that could take anywhere from three to five years.

“Most insurance companies use what is called ‘Clean-in-three,’” Lynch says. “If you maintain a clean driving records for three years following a violation, that violation ‘falls off’ and you’ll be back to your pre-violation premium.”

insuranceQuotes and Quadrant Information Services calculated the impacts of 17 common moving violations in all 50 states (and Washington, D.C.) using data from the largest carriers (representing 60-70% of market share) in each state/district.